Are Roth IRAs Still Beneficial under the New Tax Law?

The Roth IRA remains an attractive retirement planning vehicle for many individuals after the changes made by the Tax Cuts and Jobs Act (TCJA). Here’s what you need to know about Roth IRAs and Roth IRA conversions under the new law. 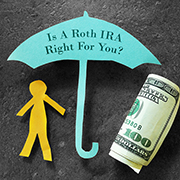 The second reason Roth IRAs are beneficial is that they’re exempt from the required minimum distribution (RMD) rules. So, unlike with traditional IRAs, you don’t have to start taking RMDs from Roth IRAs after reaching age 70½. Roth IRAs can be left untouched for as long as you live. This important privilege makes your Roth IRA a great asset to leave to your heirs (unless you need the money to help finance your own retirement).

Did you know that the Tax Cuts and Jobs Act (TCJA) contains a provision that negatively affects Roth IRA conversions?

Under prior law, you had until October 15 of the year after an ill-advised conversion to reverse it to avoid the conversion tax hit. Thanks to the TCJA, for 2018 and beyond, you can no longer reverse the conversion of a traditional IRA into a Roth account. This elimination of the conversion reversal privilege is permanent.

However, the IRS recently clarified, in Frequently Asked Questions (FAQs) posted on its website, that, if you converted a traditional IRA into a Roth account in 2017, you can reverse the conversion as long as it’s done by October 15, 2018. (That deadline applies regardless of whether you extend the deadline for filing your 2017 federal income tax return to October 15.)

In IRS jargon, a Roth conversion reversal “recharacterizes” the Roth account back to traditional IRA status. Your Roth IRA trustee or custodian (or tax advisor) can help you fill out the requisite paperwork.

Fortunately, through October 15, 2018, you have the option of recharacterizing Account B back to traditional IRA status. After the reversal, it’s as if the ill-fated conversion never happened, so you won’t owe any 2017 income tax on the conversion of Account B. And you can still leave Account A in Roth IRA status.

The idea of making annual Roth IRA contributions makes the most sense for those who believe they’ll pay the same or higher tax rates during retirement. Higher future taxes can be avoided on Roth account earnings, because qualified Roth withdrawals are tax-free. The downside is that you get no deductions for making Roth contributions.

If you expect to pay lower tax rates during retirement, current tax deductions may be worth more to you than tax-free withdrawals later. So, you might be better off making deductible traditional IRA contributions, assuming your income is below the phaseout threshold (below).

Roth contributions also make sense when you’ve maxed out on deductible retirement contribution possibilities but you want to sock away additional money for retirement.

There are limits to annual Roth IRA contributions, however. The maximum amount you can contribute for any tax year is the lesser of:

Important: Making contributions to traditional IRAs is off limits for the year you reach age 70½ and beyond. In contrast, people age 70½ or older can still make annual Roth IRA contributions (assuming the eligibility requirements explained above are met). So, Roth IRAs can be a smart savings tool for older individuals as well as for younger ones.

In addition, if you’re an employee, research whether your employer offers a Roth 401(k) option. This retirement savings tool is similar to a Roth IRA: It allows you to make after-tax contributions. Qualified withdrawals from a Roth 401(k) are generally federal and state tax-free. But these accounts are not exempt from the RMD rules. And, unlike Roth IRAs, there are no income level phaseouts for contributing to Roth 401(k) accounts, so they can be a tax-wise move for higher income individuals who are above the income thresholds for contributing to a Roth IRA.

The quickest way to get a significant sum into a Roth IRA is by converting a traditional IRA to Roth status. The conversion is treated as a taxable distribution from your traditional IRA, because you’re deemed to receive a payout from the traditional account for the money that will go into the new Roth account. So converting your IRA before year end will trigger a bigger federal income tax bill for this year — and possibly a bigger state income tax bill, too. The good news: There are no income limits on Roth conversions, and the amount you convert isn’t hit with the 10% early IRA withdrawal penalty tax even if you are under age 59½.

More good news for conversions: Today’s federal income tax rates might be the lowest you’ll see for the rest of your life. For most individuals, the tax rates for 2018 through 2025 will be lower than what you paid in prior years. In 2026, the pre-TCJA rates and brackets are scheduled to come back into force, but many people doubt that will happen.

So, if you convert your traditional IRA into a Roth IRA in 2018, you’ll pay today’s low tax rates on the extra income triggered by the conversion and completely avoid the potential for higher future rates on all the postconversion income that will be earned in your new Roth account. That’s because qualified Roth withdrawals taken after age 59½ are totally federal-income-tax-free after you’ve had at least one Roth account open for over five years.

To be clear, the best candidates for the Roth conversion strategy are people who believe that their tax rates during retirement will be the same or higher than their current tax rates.

A word of caution: Converting a traditional IRA with a significant balance could push you into a higher tax bracket. For example, if you’re single and expect your 2018 taxable income to be about $100,000, your marginal federal income tax bracket is 24%. Converting a $100,000 traditional IRA into a Roth account in 2018 would cause a big chunk of the extra income from the conversion to be taxed at 32%. (For 2018, the 32% tax bracket starts at $157,501 for single  people.) But if you spread the $100,000 conversion equally between 2018 and 2019, the extra income from converting would be taxed at 24% (assuming Congress leaves the current tax rates in place through at least 2019).

To Roth or Not to Roth?

Should you incorporate a Roth IRA into your retirement savings program? Roth IRAs offer significant tax advantages, if you’re eligible to make annual contributions or if you convert a traditional IRA into a Roth account. Today’s comparatively low federal income tax rates under the TCJA provide an extra incentive to consider the Roth conversion strategy right now. Contact your tax advisor to help understand the pros and cons of Roth IRAs and Roth conversions under the new tax law.