The IRS is strict about collecting payroll taxes and tough on “responsible persons” who don’t pay them. 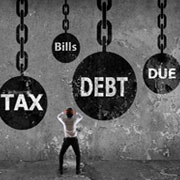 Withheld federal income, Social Security, and Medicare taxes are known as “trust fund” taxes because they are held in trust until they’re paid. If they aren’t paid, the IRS can assess liability for 100% of the unpaid amount on responsible individuals. Once that move is taken, the tax agency can start collection action against an individual’s personal assets. It can file a federal tax lien or take levy or seizure action.

A recent court case shows that a person may not be able to escape the penalty even if someone else is primarily responsible for handling payroll taxes.

The case involved a 50% owner and CEO of a tool and die company. He signed the paychecks. The other 50% owner served as the COO and prepared the payroll tax deposit checks. Both men had authority to handle money for the company, to open and close bank accounts in its name and to sign checks.

The company used a third-party payroll service provider to process its paychecks. But in December 2003, the service ended the contract after the tool and die company wasn’t able to remit the full amount of its gross payroll, including taxes.

At the COO’s urging, the company began using an in-house software system to handle payroll. Both the CEO and the COO expected to be able to fix the tax shortfall early in 2004.

The CEO maintained that the COO was the sole person entrusted to ensure that the payroll taxes were paid. He says that he didn’t learn that the COO was routinely failing to do so until July 2004. At that time, the CEO arranged a meeting with IRS to discuss the shortfalls.

At some point, the CEO was going through the COO’s desk and discovered that although the man was regularly cutting payroll tax checks, he wasn’t paying the taxes. Up until that point, the CEO claimed that the regular cutting of the checks led him to believe the taxes were being paid.

The company tried, but couldn’t stay current with the taxes, so the CEO met with the IRS again in October 2004. At that meeting, the CEO stated that he discovered that the COO hadn’t been keeping up with the taxes. The CEO acknowledged that he signed tax returns but claimed he was “just signing papers that had to be signed,” and that he didn’t review the returns or understand them.

Following an investigation, the IRS assessed the trust fund recovery penalty against the CEO. He filed suit in U.S. District Court for the Eastern District of Michigan.

The tax code allows the IRS to seek a trust fund recovery penalty from any person who is:

The IRS has broad interpretations of these two requirements. For example, a responsible person could be an officer or employee of a corporation, a member of a partnership or a shareholder, among others on a long list of individuals who can be held liable for unpaid payroll taxes.

And a willful failure needn’t be intentional. The penalty can be applied in situations where a person knew, or should have known, that the payroll taxes weren’t paid. Having a bad motive isn’t necessarily required.

In the case described above, the court found the CEO met both requirements. He had the authority to pay the taxes (even though he had no responsibilities related to calculating or paying them). The district court cited Kinnie v. U.S., where the court found that a responsible person can be responsible for a corporation’s failure to pay its taxes, or more explicitly, can direct payment of creditors.

The CEO also disregarded an “obvious risk that the taxes weren’t being paid,” the court said. While he had become fully aware of the COO’s deception in July 2004, he tried to show that until the fourth quarter of that year he had no idea that the books were being cooked — and that he had no reason to exercise oversight of the COO.

The court noted that the CEO also had continued to rely on the COO for paying the payroll taxes even after he laid him off. The court cited Calderone v. U.S., where it was ruled that a reckless disregard of the facts and known risks that taxes weren’t being paid is sufficient to hold a party liable.

By repeatedly disregarding these red flags that the COO wasn’t paying the taxes, the CEO acted recklessly and willfully, the district court found. As a result, he failed to convince the district court that he shouldn’t be held liable. (Hartman, DC MI 7/26/2017, 120 AFTR 2d-5091)

The issue of trust fund taxes is far too serious to ignore. It’s critical that a person who meets any of the financial responsibilities that can lead to a trust fund penalty be certain that the taxes are paid (see box below: Critical Questions). It’s extremely difficult to get the courts to show any mercy if the IRS assesses the penalty.

The IRS interviews individuals it suspects of being responsible parties. Some of the common questions asked are:

The more “yes” answers to these questions, the greater the likelihood the trust fund recovery penalty will be imposed.

To Capitalize or Expense: How to Treat Website Costs for Tax Purposes

Are Pop-Ups a Fresh Marketing Concept or Merely a Fad?