Changing Jobs? What Will Become of Your 401(k) Balance?

Most private sector employers, for better or worse, put you in the driver’s seat when it comes to saving for retirement. If you’re a genuinely savvy and diligent investor, you might prefer the flexibility of rolling over your accumulated retirement savings into an IRA. This choice assumes, however, that your next employer’s 401(k) plan allows you to move money into it from another 401(k) plan. Most, but not all, do.

Keep in mind, there are some important distinctions between IRAs and 401(k)s that matter to retirement investing sophisticates and novices alike:

Also, under some circumstances, you can take funds out of a 401(k) plan earlier than you can from an IRA 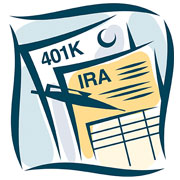 without paying the 10% early withdrawal penalty that usually applies to withdrawals prior to age 59 1/2. The “rule of 55,” as it’s known, lets you start taking money out of your current 401(k) plan the year you turn 55 if you leave that job (whether it was your decision or your employer’s). However, it only applies to dollars you put into the plan during your stint with your most recent employer. So, you wouldn’t be penalized for having rolled over 401(k) dollars from a prior employer to an IRA, but it’s still useful to know about.

If none of those considerations matters a great deal to you, you can move to the next level of comparisons — investment options and costs. Suppose you’re relatively close to retirement and want to be very conservative with your investments. “Stable value” funds are a popular option for conservative investors. These are essentially bond portfolios that provided a fixed return over a set period, backed by an insurance company guarantee. They’re available only in 401(k) plans, not IRAs.

In theory, though, you can get just about any other kind of investment in an IRA. However, your  IRA investment options will vary based on the financial institution you choose as your custodian. Also, some financial services companies give you incentives to invest in their own financial products, and penalize you if you opt for outside funds. That’s fine if you’re content with the firm’s own investments, but no one wants to feel trapped.

A broader potential hazard associated with IRAs is being stuck with “retail” class shares of mutual funds. Such shares carry higher fees than “institutional” shares generally (but not always) available to 401(k) investors. But you also need to consider differences in total expenses charged against your retirement assets, including 401(k) plan administrative costs. Often smaller employers pay higher administrative fees than larger plans, and those fees are typically borne by employees.

Even relatively small differences in combined fees can have a big impact on your retirement savings accumulation over time. For example, paying a half a percent more in annual fees on $12,000 in annual retirement savings over a 25-year period would reduce those savings by $65,000.

The quality and independence of the investment advice you’d receive in either scenario could also be an important consideration for your rollover decision. Employers generally use 401(k) advisors who are held to a “fiduciary” standard of care. The person or people within a company in charge of a 401(k) plan are also considered fiduciaries. This means they’re legally bound to act in your best interest — and vulnerable to being sued if they don’t. If you work with a traditional broker with your IRA, he or she might not be held to such a high standard.

That distinction doesn’t guarantee that one advisor will be better than the other, but it’s an important factor to take into consideration. Also, a relatively new player on the investment management scene — the “robo-advisor” — is an investment platform for IRA (and other) investors that can guide your choices with computer-generated recommendations.

Given the high stakes, don’t rush your decision on what to do with your 401(k) funds from a former employer. Chances are that your employer won’t try to force you to move your funds out of their plan — especially if you have at least $5,000 in your account. If that’s the case, you can take as long as you want to decide — including the choice of leaving the money right where it is.