Federal Contractors Get a Minimum Wage Increase in 2018

The U.S. Department of Labor’s Wage and Hour Division (WHD) has announced that the minimum wage rate for federal contractors will increase from $10.20 per hour to $10.35 per hour, effective January 1, 2018. 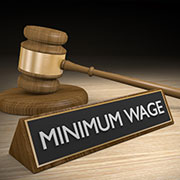 On February 12, 2014, President Obama signed Executive Order 13658 which established a minimum wage rate for federal contractors. The executive order required parties who contract with the federal government to pay workers performing work on or in connection with covered federal contracts at least:

The contractor must increase the cash wage paid to a tipped employee to make up the difference if a worker’s tips combined with the required cash wage of at least $7.25 per hour don’t equal the hourly minimum wage rate for contractors as noted above. Certain other conditions must also be met.

Minimum Wage for Other Employees

What Employers in Some States Must Pay

Some states have different minimum wage rates for large and small employers and impose other requirements. For example:

An employer of a tipped employee is required to pay $2.13 an hour in direct wages if:

Many states also have their own laws related to tipped employees. Again, if an employee is subject to both federal and state laws, he or she is entitled to the law that provides the greater benefits. Some states (including California, Oregon, Nevada, Montana, Minnesota and Alaska) require employees to pay tipped employees the full state minimum wage.

Contact your Cornwell Jackson payroll advisor if you have questions about minimum wage issues in your situation.