Good News! More Families May Be Eligible for the Child Credit in 2018

The Tax Cuts and Jobs Act (TCJA), which was signed into law on December 22, 2017, made significant changes to the child credit. This credit is generally available to taxpayers with children under the age of 17, but the new law adds a new (smaller) credit for other dependents. Here are the details.

Under prior tax law, the child credit was $1,000 per “qualifying child.” But the 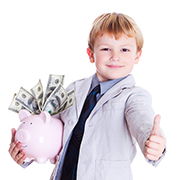 To the extent the $1,000-per-child credit exceeded your tax liability, it resulted in a refund of up to 15% of your earned income (for example, wages or net self-employment income) above $3,000. For taxpayers with three or more qualifying children, the excess of the taxpayer’s Social Security taxes for the year over the taxpayer’s earned income credit for the year was refundable. In all cases, the refund was limited to $1,000 per qualifying child.

Important: These “old” rules still apply to tax returns that you’re filing for the 2017 tax year (which must be filed or extended by April 17, 2018).

Examples of dependents who qualify for the new credit include:

So, if you were previously prohibited from taking the credit because your AGI was too high, you may now be eligible to claim the credit. But, beware, these phaseouts are not indexed for inflation.

In addition, under current law, the refundable portion of the credit has been increased to a maximum of $1,400 for each qualifying child. And the earned income threshold has been decreased to $2,500 (from $3,000 under prior tax law) — which could potentially result in a larger refund. The $500 credit for dependents other than qualifying children is nonrefundable.

The new tax law isn’t all good news for families. For the 2017 tax year, you can claim an exemption of $4,050 from taxable income for each qualifying dependent (subject to phaseouts at higher income levels). But that deduction has temporarily been suspended, for 2018 through 2025.

Many families still expect to come out ahead under the new law, however. That’s because credits reduce your tax bill dollar for dollar. By contrast, exemptions and deductions only reduce your taxable income, which is the amount that you’re taxed on.

However, families with older kids may be at a disadvantage under the new law. Why? Under prior law, dependency exemptions were available for qualifying dependents up to age 24 if they were full-time students. But a young person is ineligible for the child credit starting the year he or she turns 17. (However, older kids may still qualify for the new $500 credit for nonchild dependents, as well as various education credits, under the new law.)

Your tax advisors can help you take advantage of the tax breaks that may be available for raising children and caring for other family members.

Thanks to the TCJA, more families will receive tax breaks to help offset the costs of raising kids and taking care of other nonchild dependents. If you have children under 17 or other dependents, contact your tax advisor to determine if these changes can benefit you.