Help Veterans on Your Staff Thrive

A survey of veterans by Syracuse University’s Institute for Veterans and Military Families found that half of the respondents left their first civilian jobs within a year, and 65% left within two years. A commonly cited reason was culture shock. Employers that make a point of hiring veterans — and those that don’t — owe it to themselves and the vets to prevent rapid turnover. 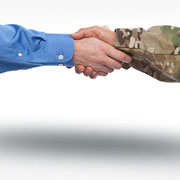 Consider the following characteristics of the military culture and work environment, and think about any contrasts to your own. In the military, generally speaking:

Fish out of Water?

Unless all of the above characteristics precisely describe your workplace culture, you may be able to understand how an employee just returning from military duty might feel like a fish out of water. While a veteran might find a more unstructured and informal working environment a welcome change from the military, a period of adjustment will likely be needed.

According to BelKat Solutions, LLC, a consulting company that helps civilian employers to integrate veterans successfully into their workforce, a “veteran-informed” organization:

In other words, integrating veterans for the long term isn’t a “one-and-done” proposition.

Employers need to be aware that what seems to be attitude problems on the part of vets might really indicate a bumpy transition to civilian work life. “Behavior that an employer or fellow employees may perceive as arrogance, entitlement, or aggressiveness or as being judgmental, frustrated, or apathetic may in fact be a transitional response that can be successfully addressed in an informed environment,” said Belkat.

Whether or not you have made a special effort to recruit veterans, once they’re on board, a long-term strategy for keeping them there and flourishing has four basic components, some of which also apply to any other kind of new-hire. The first is assimilation.

The assimilation phase can include such activities as:

The needs of veterans with recent combat experience might require extra attention, after an assessment of any special sensitivities. Such an assessment might have implications, for example, for the noise level or degree of privacy in the new hire’s immediate work environment.

Beyond basic assimilation, a tailored training and development initiative can serve to identify and address any skill or other gaps in the veteran’s professional development that need to be filled. For example, a veteran who didn’t have a “desk job” in the military (nor in any previous setting) might lack familiarity with basic or the latest versions of desktop computer software.

The two remaining components of a long-term veteran transition strategy recommended by Belkat involve career growth and compensation. About the former, it’s important to understand that in the military, the stairways to the top for non-commissioned and commissioned officers are generally well-defined. Identifying those routes in your organization, to the extent they can be described, is very important to vets. But if a particular job doesn’t lead to career growth, that must be made clear as well.

More than a Rank

Keep in mind that in the military, people are often first defined by their rank, instead of by the nature of their job. A computer specialist with the rank of sergeant would more likely be described as a sergeant than a programmer, if a one word description were required.

Compensation, including intangible rewards such as special recognition, is no less important to vets than any other employees. Keep in mind, however, that in the military opportunities for special monetary awards are more limited. Recognition for service members has more commonly taken the form of medals and commendations, so take time to go over the pay system. If it’s been a while since they’ve worked in civilian jobs, they may have unrealistic expectations of what kind of salaries and raises are possible.

Plenty of resources are available that delve more deeply into the topic of helping veterans transition to a successful civilian career. This includes talking to professional acquaintances who have already been down this road. Unless you’re a veteran yourself, chances are the insights you will gain will carry you and your newly transitioned vets far.

Is your income high enough to owe two extra taxes?

Separating your business from its real estate