The fate of overtime rules continues to remain uncertain. 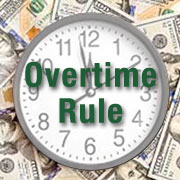 The “final rule” that was slated to go into effect on December 1, 2016, was put on hold indefinitely after a district judge in Texas blocked its implementation (for details of the rule, see box below). The judge found it likely that the Obama administration overstepped its authority with that rule, which the Trump administration opposes.

In the meantime, the Republican-controlled House of Representatives passed legislation that would authorize time off in lieu of compensation for overtime. That bill has moved to the Senate. The White House has voiced support for it.

Under the Fair Labor Standards Act (FLSA), unless exempted, eligible employees must be paid time-and-a-half their regular pay rate for time worked beyond 40 hours a week. The white collar exemptions exclude certain executive, administrative and professional (EAP) employees and outside salespeople.

To be exempt from the overtime rule, the Department of Labor (DOL) requires most employees to meet each of the following three tests:

1. Salary basis test. The employee must be paid a predetermined and fixed salary that isn’t subject to reduction because of variations in the quality or quantity of work performed.

2. Salary level test. The amount of salary must meet a minimum amount. Currently, this figure is $455 per week for EAP employees (the equivalent of $23,660 annually).

3. Duties test. The employee’s job duties must primarily involve executive, administrative or professional duties as defined by the DOL regulations.

In addition, there is a relaxed duties test for certain highly compensated employees who receive total annual compensation of $100,000 or more and are paid at least $455 a week.

The regulations on overtime pay date back to 1940. Although they have been updated periodically, the last time was in 2004. The DOL issued its latest revisions in 2015, after several years of lengthy discussions. Now it’s back to the drawing board (see What Was in the Final Rule? below).

Introduction to the Proposed Bill

Under the House-passed measure, employers may let workers opt to accept extra time off instead of receiving overtime pay. Employees could accrue up to 160 hours of comp time during a 12-month period in lieu of overtime wages. Any unused comp time at the end of that period would have to be converted to overtime pay within 31 days. Employees would have to be paid at the greater of:

1. Their regular pay rate when the time off was earned, or

The accrued comp time, titled the Working Families Flexibility Act, could be used within a “reasonable” period after making a request for time off provided it doesn’t unduly disrupt the employer’s operations. Employees must provide adequate notice and employers would make necessary accommodations.

Employers could elect to cash out comp time that exceeds 80 hours or discontinue the swap policy by giving 30-day notice. Similarly, employees could choose to end their participation after giving notice within 30 days.

Finally, if the rules in the proposed bill were violated, employers might have to pay affected employees the amount owed for each hour of accrued comp time plus an equal amount as damages, minus any compensatory time the workers used. These provisions are subject to change.

Proponents of the proposed bill claim the measure would provide employees with the flexibility they want without creating hardships for employers. They note that the policy would be strictly voluntary. In addition, allowing employees to defer payment of comp time is essentially like getting an interest-free loan.

“This bill is about freedom, flexibility and fairness,” said Rep. Virginia Foxx (R-NC), chairwoman of the House Committee on Education on the Workforce. “It gives workers the freedom to choose what is best for themselves and their families. For some workers, money in the bank may be the best choice for them, and nothing in the bill would take that away, but other workers would seize the opportunity for time off with their family.”

However, detractors are concerned about the interests of employees. “The bill weakens protections under the Fair Labor Standards Act at the moment that we ought to be strengthening the law,” Rep. Robert C. Scott (D-VA) reportedly argued on the House floor. “Under the bill, employers could withhold overtime pay for a long time, which otherwise would be a violation of the FLSA, and it undermines the 40-hour workweek mechanism,” he added

Different proposals for revising the overtime rules have been tabled during the past two decades, but this effort has some momentum with the support of the White House behind it.

What Was In the Final Rule?

The final rule, which is now in limbo, makes several significant changes to the overtime rules, including:

If new proposals emerge from the ruins, they may contain similar provisions or take a completely new approach.