Typically, construction firms have worked in the field while manufacturers stayed put, cranking out products in centralized factories. 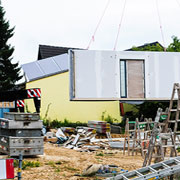 One of the exceptions to the rule were diners. They crossed the barrier by being fabricated off-site in their familiar narrow and elongated style, which facilitated transportation to the restaurant’s ultimate site. In fact, buildings have been built in one place and then reassembled in another throughout history, with early uses being for new settlements and hospitals. But now, the distinction between on- and off-site constructions is becoming increasingly blurred. Offsite construction — also called prefabrication or modular construction — has been rapidly growing in popularity.

According to a recent report published by Technavio, a global technology research and advisory firm, the global prefab construction market is expected to rise at a compounded annual rate of between 6% and 7% during the next few years. The report, which valued the prefabricated construction market at about $79 million in 2015, expects the amount to scale the $110 million mark by 2020. Now, even contractors who were initially hesitant are looking to get on board.

The concept of off-site construction is relatively simple. Essentially, building components or completed structures are manufactured in a factory. Typically, this method utilizes all the bells and whistles of modern manufacturing, including ultra-precise design software, robotics and logistics-based delivery. This helps to create uniform pieces that can be built quickly and transported efficiently to the jobsite, where they’re assembled.

Proponents of off-site construction point to two major reasons for its growing popularity:

Producing components or buildings in the factory ensures complete control of the building process. Notably, there are no deviations in quality due to a shortage of skilled workers, a problem that has been plaguing many on-site crews in the past decade.

What’s more, construction firms and contractors don’t face the usual disruptions because of inclement weather, especially during the winter months, or accidents caused by human error. As a result, schedules can run seamlessly and few, if any, unexpected expenses are incurred.

But that doesn’t mean off-site construction is being universally embraced. Some long-time contractors and others in the construction industry bemoan the cookie-cutter nature of prefabrication. They maintain that computers and robots in the factory can’t readily duplicate distinctive touches and true craftsmanship.

Whether off-site construction is beneficial or not, or somewhere in between, is a matter of opinion. Nevertheless, the industry is leaning in this direction.

Several developments are fueling the increase in off-site construction as we head into 2018. Contributing to the trend are these five key factors:

As finding and retaining good workers remains a challenge, it becomes harder to stay on schedule and on budget. Off-site construction can help ease this problem.

Of course, prefab doesn’t eliminate the need for skilled labor. Skills are needed both for the installation and inspection of the modular structures and the actual fabrication. Modular construction does, however, mitigate some of the labor requirements needed for initial construction.

2. Technological advances. Technology is a driving force behind the growth of prefab. Businesses and consumers are accustomed to whipping out their smartphones and ordering whatever they want on-demand and instantly. Off-site builders are making this a reality.

For example, software giant Autodesk recently partnered with San Francisco-based Project Frog to create a cloud-based connected system linking architectural designs to industrial fabrication facilities. As a result, you can order up a building as easily as you can buy something on Amazon or eBay. Corporate giants like Starbucks and Marriott have already used this sort of high-tech approach to build drive through coffee outlets and prefabricated hotel rooms.

3. Collaborations and alliances. The Autodesk-Frog partnership is just one example of the increased collaboration and cooperation between firms. These alliances aim to satisfy both the prefabricators and traditional construction firms and contractors. Previously, the construction industry operated in a virtual vacuum.

Collaboration and communication at the outset is critical to success. Once prefabrication begins, it’s more difficult and costly to make changes, especially at the rapid pace of off-site construction. It pays to get it right from the start.

4. Objections and education. As more construction firm owners and their workers learn about the benefits of off-site construction, objections gradually will likely diminish. In addition, education will be enhanced by the successful completion of projects. Some of the most effective promotions of modular construction come from Marriott, Starbucks and Google, who bought 300 modular units for Silicon Valley employees.

5. Eco-friendliness. Besides saving time and money and improving quality, off-site construction presents another advantage: It’s friendlier to the environment than traditional construction.

Construction typically requires extra materials that lead to increased waste. However, the extra materials from sub-assemblies in a factory can be recycled in-house rather than sending them to a landfill. Moreover, the controlled environment of a factory allows for more accurate construction, tighter joints and better air filtration. In turn, this can result in better wall insulation and increased energy efficiency. Prefabrication and “going green” may work hand-in-hand.

No Worries for Tradition — Yet

Although great strides are being made in prefab buildings, they aren’t expected to eliminate the need for “boots on the ground” construction companies. The model tends to suit certain types of projects — such as health care facilities and modular housing developments — where uniformity and repetition of design is standardized.

However, as the popularity of off-site construction continues to grow, it may soon affect your market — if it hasn’t already. Take a look around and, if necessary, take action to help ensure your firm won’t be left in the dust.

Construction Company Owners: Watch Out for the TFRP