The federal overtime law can lend itself to differing interpretations. In those cases, workers may challenge how an employer applies the rules. 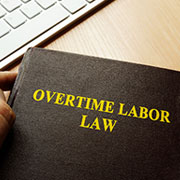 Under the Fair Labor Standards Act (FLSA), eligible employees must be paid time-and-a-half their regular pay rate when they work more than 40 hours a week, unless there’s an exemption. Here are three examples of when employees challenged their employer’s application of the law.

1. Bonuses and shift differentials. The Wage and Hour Division (WHD) of the Department of Labor (DOL) reached a settlement with a Midwest health care management company regarding overtime violations at 23 skilled nursing and assisted living facilities. The company agreed to pay $165,379 to 594 workers in back wages and damages.

The WHD found that the company violated the FLSA when it failed to include non-discretionary bonuses and shift differentials in calculating overtime rates. The omissions also triggered violations of the recordkeeping provisions of the FLSA.

In addition to paying the back wages and damages, the company agreed to use a new payroll service and software.

Failing to accommodate bonuses and shift differentials in overtime pay is a common FLSA violation, particularly in the health care industry.

2. Employees working multiple jobs. In another case, the U.S. Third Circuit Court of Appeals ruled that a Pennsylvania county didn’t willfully violate the FLSA when it calculated overtime.

Two employees worked two separate part-time jobs. The county tracked and paid these employees for each of their two individual jobs, but later discovered that it had failed to aggregate the hours for both jobs, resulting in a failure to pay the overtime rate.

The county didn’t dispute that it violated the FLSA’s overtime provisions. The issue at hand was whether the violations were willful. This issue matters because a finding of willfulness expands the limitations period for claims under the FLSA.

The court ruled that although there was evidence the county made bureaucratic errors that perhaps could be attributed to “government morass,” its failure to pay correctly didn’t rise to a level of “recklessness or ill will” that might have demonstrated willfulness. (Souryavong v. Lackawanna County, CA-3, Dkt. No. 15-3895, 9/20/17)

Under the U.S. Supreme Court’s long-standing definition, willfulness includes situations when the employer, at the time of its FLSA violation, either knew its conduct was prohibited by the law or “showed reckless disregard” for the matter. Simply acting unreasonably is insufficient. In other words, there must be an element of actual awareness. (McLaughlin v. Richland Shoe Co., U.S. Sup. Ct., 486 U.S. 128, 5/16/88)

The county employees argued that the violations were willful in this case because:

The court, however, found no evidence that the county was “specifically aware” of the multiple-job FLSA overtime problems. The court also noted that the problem was addressed within a year of the email raising concerns — much sooner than another case where the court did find willful violation.

3. Requests for overtime pay. In yet a third case, the Seventh Circuit Court of Appeals upheld a lower court’s decision that a city wasn’t liable for paying overtime wages to off-duty police officers working on mobile devices. (Allen v. City of Chicago, CA-7, Dkt. No. 16-1029, 8/3/17)

The officers were members of an organized crime bureau. Although the officers had scheduled shifts, they were sometimes required to work hours when they would ordinarily be considered off-duty. To assist its officers, the police department issued mobile devices that could be used during off-duty work.

Under the police department’s procedure, officers were required to submit time slips to obtain overtime pay. The officers regularly used this system, but during the period covered by the lawsuit, many officers didn’t submit slips for work done on the mobile devices.

The main issue was whether the unwritten policy prevented or discouraged the officers from submitting overtime slips. Although an employer’s duty to pay overtime arises even when it doesn’t request the work or the work hasn’t been reported, the FLSA stops short of requiring employers to pay for work they didn’t know about and had no reason to know about.

Some plaintiffs testified that the culture of the organized crime bureau would frown on submitting slips for work using the mobile devices, but others, including some plaintiffs, had submitted slips for such work and were never denied compensation. Some supervisors knowingly approved slips submitted for such work; others probably did so without knowing it since the slips didn’t indicate whether the work was done on a mobile device.

No one ever told plaintiffs not to submit slips for that work, and no one was ever reprimanded or disciplined for submitting such slips. All told, the court concluded, the evidence didn’t bear out the common culture plaintiffs alleged and there was no FLSA violation.

Moral of the Examples

It isn’t unusual for situations to fall between the cracks of the usual overtime applications. Hire a reputable payroll provider you can trust and look to your Human Resources department for guidance.

To Capitalize or Expense: How to Treat Website Costs for Tax Purposes

Are Pop-Ups a Fresh Marketing Concept or Merely a Fad?