Are You Ready for the New IRS Partnership Audit Rules?

Legislation enacted in 2015 established a new IRS audit regime for partnerships and limited liability companies (LLCs) that are treated as partnerships for tax purposes. Here’s a comparison between the old and new partnership audit rules, along with a summary of recently proposed guidance to help partners prepare for the changes that are effective starting with the 2018 tax year.

Relief to Partnerships that Missed the New Filing Deadlines 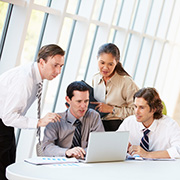 The Surface Transportation and Veterans Health Care Choice Improvement Act of 2015 changed the date by which a partnership must file its annual return. The  changes went into effect for the 2016 tax year.

Many partnerships filed their returns or their extension requests for tax year 2016 by the old April deadline. If not for the Surface Transportation Act, these returns and requests for extension of time to file would have been on time. The IRS has decided to provide penalty abatement for these partnerships, provided they meet the following criteria:

This set-up was deemed to be inefficient, so Congress established a new audit regime for partnerships. However, the old rules will continue to apply to most partnerships for tax years beginning in 2017.

Specifically, the partnership — not the individual partners — will be required to pay an imputed tax underpayment amount, which is generally the net of all audit adjustments for the year multiplied by the highest individual or corporate federal income tax rate in effect for that year.

However, the partnership can pay a lower amount if it can show that the underpayment  would be lower if it were based on certain partner-level information, such as:

An alternative procedure, known as the “push-out election,” allows the partners to take the IRS-imposed adjustments to partnership tax items into account on their own returns. Or, if eligible, a partnership can elect out of the new rules altogether. (See below for more details on both elections.)

With all this authority comes the associated risk, which may mean that some partnerships will have a hard time finding someone willing to act as the representative. Partnerships should consider indemnifying or compensating their partnership representatives accordingly.

According to the proposed regulations, partnerships must designate a partnership representative separately for each tax year. The designation is done on the partnership’s timely filed (including any extension) federal income tax return for that year.

As noted above, under the new rules, a partnership must pay the imputed underpayment amount (along with penalties and interest) resulting from an IRS audit — unless it makes the push-out election. Under the election, the partnership issues revised tax information returns (Schedules K-1) to affected partners and the partnership isn’t financially responsible for additional taxes, interest and penalties resulting from the audit.

Partnerships may want to require their partnership representatives to analyze specified factors to determine whether a push-out election should be made.

Option to Elect Out of the New Rules

I-9 Audits Are On the Rise: Be Prepared